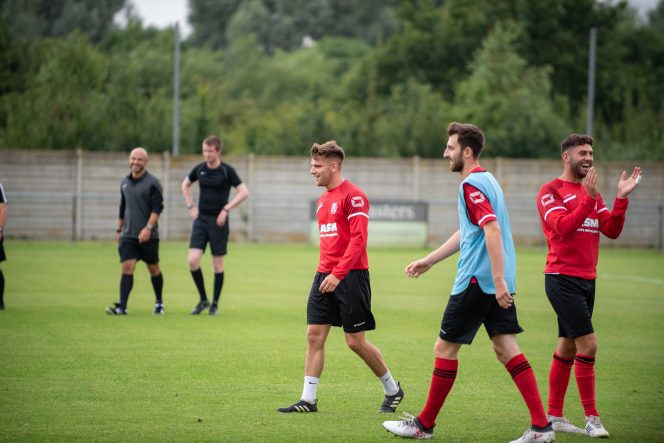 Mercifully the recent heatwave had subsided for this home friendly at Meadow View Park against Premier League opposition Beaconsfield Town (no, not THAT Premier League).

The match started in cooler, cloudy conditions and after the morning light rain the pitch looked a lush green and in excellent condition for good football. Which is what we got.

Despite worryingly warming up in shirts clashing with Thame’s red, Beaconsfield came out for the kick off in their smart all-white change strip (Real Madrid) however Gareth Bale was not evident. But, thinking of the OTHER Premier League, Beaconsfield did have a Paul Pogba lookalike in the number 6 shirt, in that he had a similar physical stature and played very much in Pogba’s position, style and body language.

Following his unfortunate injury early on against Oxford City, target man Lynton Goss was still unable to start, so that fellow forward Dan West was upfront, with Duran Martin supporting from behind.

Both teams started the game in lively fashion, with a striker supported by fast men down the flanks. Beaconsfield started with some mazy runs cutting in from the wings and getting shots away, and Thame did the same, with a great speed and snap contest developing between Noah Alabi and the away side’s number 2 (who himself played in a right wing position in the second half).

The full back needed some great ground-tackles to keep Alabi from beating him to the ball, and there was a spectacular shoulder/shoulder enthusiastic challenge and tussle between the two mismatched players as Alabi tried to beat the defender for speed to a beautifully-placed long pass into the side edge of the Beaconsfield penalty area.

The away side continued to threaten the Thame goal, but Thame were giving as good as they got, and Dan West closed down the goalkeeper in possession, the ball running free towards the goal but the gk managed to recover just in time before the ball crossed the line.

The Beaconsfield threat was underlined when Thame’s Matt Peake-Pijnen headed off the line for a corner after a sharp break on the Thame left by the very quick and skilful right winger. Thame were needing to defend stoutly against mazy runs from this man, but also from the other wingman.

The even and very entertaining first 10 minutes had featured five good attacks, two from Beaconsfield and 3 from Thame. And it was Thame who scored first, on 20 minutes, Dan West being well picked out running from behind into the gap left by three defenders closing in around Thame provider Tom Ashworth, and Westy taking the pass and eluding  two more defenders and beating the goalkeeper’s rush and dive at his feet to slip the ball into the net. 1-0 to Thame.

Five minutes later Craig Hill needed to make a good save on the ground to his right to keep the scores level. Beaconsfield seemed piqued by being behind to supposedly lower-league opposition and their tackles began to get increasingly robust, with Thame’s West getting booked for an indignant reaction to one of these. Both teams were taking this game as something more than a pre-season friendly.

There was another scare for Beaconsfield before the break as a long shot from Martin from near the halfway line bounced in front of the Beaconsfield goalkeeper who muffed his save and had to parry the ball round the post for a corner. But there was a scare at the other end too as Thame left back David Lynn had to race back to make a necessary covering tackle, a free kick being given just centimetres from the edge of the penalty box. The resulting curler to the Thame back post was well headed away by Dan West.

Halftime came with Beaconsfield probably having had more dangerous attacks than Thame but the combination of a repeat of the excellent defensive performances put in by Thame against Oxford United and City, and effective protection by the midfield, had caused most of Beaconsfield’s shots to be from distance. And Thame had the vital only goal. As the players came in for halftime the faces of the Beaconsfield players showed some concern that they had been “Thamed” in the first half.

As is so often the case in football, the second half started entirely different. Beaconsfield went about the home side with renewed vigour, and either their forward momentum kept Thame pushed back, or Thame had decided to sit and rely on their defensive mettle. With the whole Thame XI compact in their own half there was little outlet, but Thame still seemed to be stoutly resisting the onslaught, assisted by some Beaconsfield crosses and finishes which went way over the top, so that at one moment the attacking player taking a corner was confronted by a choice of THREE returned balls.

Substitutions were of course likely to be on the cards, Thame now have three away games before the season proper, and scorer West and assister Ashworth were replaced on 60 minutes. We were then treated to the sight of little Noah Alabi through the middle against the tall central defenders, and he certainly made them move about, but he eventually had to be substituted. Beaconsfield made their substitutions on 70 minutes and the balance of play remained much the same.

But an amazing series of continued pressure from the away side over a sustained couple of minutes shooting, led to an equaliser. On 75 minutes Beaconsfield’s no 11 was left in plenty of space for a speculative shot from Thame’s defence’s right, which went just wide of a gaping left corner of the Thame net.

A minute later gk Craig Hill had to come to the edge of his penalty area to head clear another Beaconsfield probing cross, and had to immediately retreat to his goal line where, just finishing his back-pedalling he made an incredible fingertip backwards push onto the crossbar from a superb Beaconsfield effort. From a Thame throw in near their own left corner flag, Beaconsfield won the ball in a crowded area, and set up a series of three passes across the pitch in front of the thame defence, culminating in a really strong left foot shot from outside the penalty area which Hill did really well to get down to thud off his gloves, but a Beaconsfield player was quicker to move for the rebound than a couple of defenders and from point blank range could only hit the chest of  the just rising Craig Hill, from where the ball flew up and into the net. 1-1. 75 minutes.

Thame forward moves were few by now and Beaconsfield kept up the pressure for a winner. In a rare Thame attack, tall defender Callum Mapley, close to the goal line at the far post, brought a cross brilliantly under control off his chest, only for his promising snap shot to be deflected for a corner, from which he soared into the air to head just wide and slightly high.

We had another fright when a Thame defender mis-headed a long cross into the Thame penalty box from way out on the Beaconsfield right, close to the halfway line, backwards towards his own goal, but gk Craig Hill gathered safely.

By now, new signing from Didcot, Greg Hackett was the lone forward. A quick interception by Peake-Pijnen of a Beaconsfield forward pass, getting the ball into midfield directly, and a slide rule pass to Hackett exploiting the space between the two B central midfielders and a vain appeal for offside from one of the two defenders, saw Hackett racing for the Beaconsfield  goal, pursued by the two defenders, with the refs assistant in hot pursuit along the line, flag held firmly down. In his headlong run, Hackett lobbed brilliantly over the advancing gk into the vacant net. Joy and relief!

But Beaconsfield went pushing on, now for a last minute equaliser.

A super sharp shot from Beaconsfield’s Bailey was brilliantly turned for a corner by Hill and Beaconsfield’s resultant corner was wildly overhit and went for a throw in on the other side of the pitch. The same player, by now in the advanced role, upended spectacularly before hitting the ground for a last minute penalty shout, which was denied.

In what we didn’t know at the time was the last minute of added time, Thame again broke upfield from the Beaconsfield embrace, with our substitute Aston Goss in the no 18 shirt’s turn to be hotly pursued to the Beaconsfield goal. With a defender now in close attention close to goal, he clearly decided the defender could get a deflection on any shot, and possibly the ball was on his less-favoured right foot, so Goss, in an amazing display of ball skill, slammed on the brake, dead stop, shifted the ball from right foot to left, and curled in a shot to the far post, which unfortunately went just over the bar. It seemed like the ref had been too excited by the move to blow for fulltime—the whistle went the moment the shot had gone out over the bar.

Three more friendly games, all away, before Thame’s Southern League Division 1 season begins, but this display and defeat of a Premier Division side playing well, promises much for Thame’s season, and, if anything like this game, super entertainment for those who go to the Meadow View Stadium to see the matches.

This group of players deserve support from the townsfolk they most committedly represent. 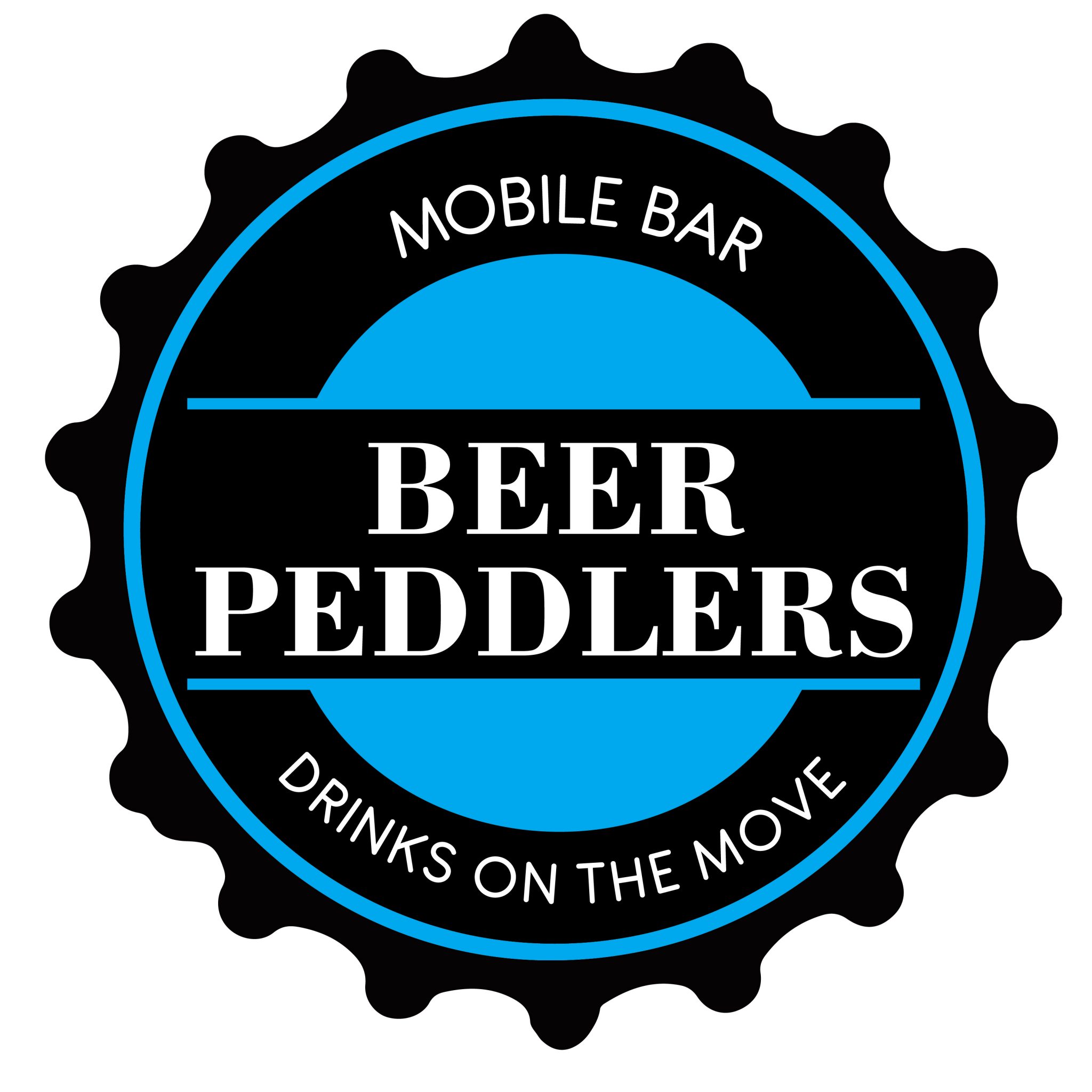