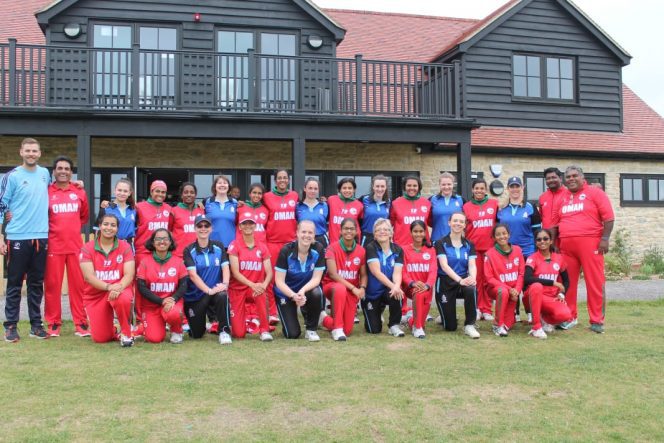 Last Sunday (26/05) more history was made, as Thame Town C.C. welcomed the Oman Women’s national cricket team as part of their five-game tour of the UK – the first international opposition at Thame since the Maltese national side visited over 30 years’ ago!! The visitors arrived in Thame having previously taken on Wanstead CC, Hertfordshire, the CCC and the MCC as part of their tour.  Their tour also included a wonderful day at Lords to witness the final of the Royal London Championship Cup between Hampshire and Somerset.

Having won the toss and choosing to bat the impressively-drilled Oman team showed their class by amassing an impressive 182 for 3 in their 20 overs.    Standout displays came from Jayadhanya Gunasekar (80 off 66 balls), Hina Javed (31 off 20) and captain Vaishali Jesrani (28* off 23). Sarah Gumbold  and Bridget Cooper took their first international wickets. In response Thame Woman toiled against some impressive bowling, scoring 60-8 off their 20 overs.  Liv Hart and Beth John performed well and Savanagh Beaumont and Lina Budde-Manning resisted well in the final 5 overs. The Omani team management were graceful in their thanks to Thame Town CC for hosting the game in such beautiful surroundings.

Thanks go to Sarah Sanderson for organising the game, to Simon Prodger (National Cricket Conference) for arranging the UK tour.  Special thanks also to Sajit Kumar (Omani manager), Haider Ali (Coach) , Suresh Kumar (Trainer) and all the team for bringing such skill and vibrancy to Thame on what was a special and memorable day.