Chinnor run in eight tries to claim victory in Yorkshire 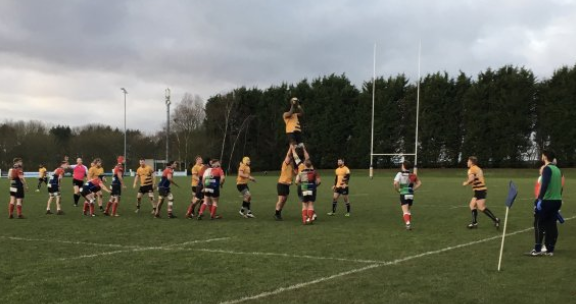 CHINNOR produced a superb second half performance to beat Hull Ionians in their first game of 2020.

The Thame-based side ran in eight tries in Yorkshire to move up to fourth in National League 1.

It leaves them still nine points behind leaders Rosslyn Park heading into next Friday’s mouth-watering clash at home to Rams, who are only second by virtue of defeats.

The visitors were slow out of the blocks early on, but upped their game to secure their biggest win of the season.

It proved a successful afternoon, with Camilo Parilli-Ocampo making his debut off the bench after missing the first half of the campaign through injury, while Oscar Heath made his first appearance of 2019/20.

It was an emotional day for Hull following the death of Billy Hardy and a minute’s silence was observed before kick-off with Chinnor skipper Worrall laying a wreath on the pitch.

The home side wanted the game to go ahead in his memory and were on the front foot in the opening stages.

Joe Rees was needed make a fine tackle to stop Tyler Heelas powering over, but Hull were unable to inflict any significant damage due to errors in possession.

Chinnor, who made eight changes, five positional, from the defeat to Richmond at the end of 2019, had not made the best of starts and, despite beginning to dominate possession and territory, were unable to get into their rhythm.

Saying that, Hodson looked certain to cross on 14 minutes, but he was tackled into touch by Jack Colbourne after the visitors launched an attack on the blindside following a lineout.

Chinnor had looked good in spells, with Kieran Goss and Worrall troubling Hull when running from deep.

But the hosts took the lead against the run of play on 25 minutes when Colbourne intercepted May’s pass on half-way and raced over unopposed, Max Titchener converting, to make it 7-0.

Chinnor were undeterred and the score seemed to help them find another gear, culminating in three tries in the space of six minutes.

They levelled on 34 minutes when the visitors were awarded a penalty try after hooker Selway had been stopped short.

Prop Pieterse then powered his way over for his first try for the club, May converting, to make it 14-7.

And it got event better before half-time as fly-half May intercepted a pass 50m out, hacked forward and collected a bouncing ball to dive over before adding the extras for a 14-point lead at the break.

Chinnor then went on to improve further in the second half, scoring five tries to race away to a commanding victory.

Winger Hodson raced through a gap to dive over for the four-try bonus point, May converting, to make it 28-7.

Hull were struggling to get out of their own half, but the Oxfordshire side had to wait until the hour mark to extend their lead, Selway plunging over from a driving lineout for his eighth try of the season. May slotted a difficult conversion from the touchline to make it 35-7.

Chinnor were not finished and, after Hodson and Matt Marley were stopped short, there was no denying Ehizode who powered across from close range for an unconverted try on 66 minutes.

The visitors kept the hammer down and Hodson’s break set up another attack down the left, before the play was quickly switched to the other wing for Worrall to dive over for his 11th try of the campaign.

With May off the pitch, Caolan Ryan had taken over the kicking duties and he nailed the conversion to extend the advantage to 40 points with nine minutes to go.

There was still time for more points and a lineout on the 22m line led to Yawayawa charging through a gap to go over under the posts, Ryan adding the extras.

Chinnor were then forced to play the final few minutes in their own half as they closed out an impressive victory to head into next week’s Friday night showdown with Rams in a confident mood.